Every day, WordPress issues Prompts or Challenges. Today’s was “Look through your nearest window for one minute and tell us what you see”.

I hereby invoke the right of Artistic License and also include what I THINK when I look out this window.  I left it pretty much the way it came out of my head…stream-of-conscious style.  I included links so that if you fall behind, you can click to get the rest of the story.

I’m feeling a little guilty about this half-assed post. But I would feel guiltier if I kept ignoring all the other crap I need to do…. So there ya go. Have a nice day, drive carefully, and loveyabye. 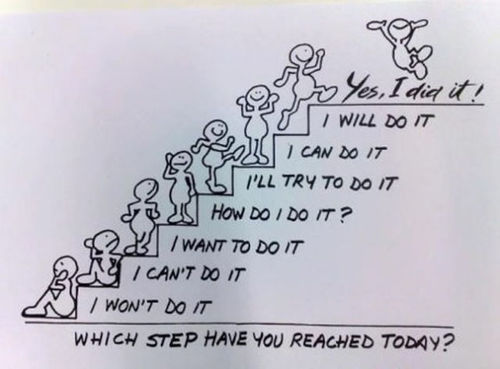 Thanks to The Daily Prompt for this little nugget. It’s a great question. And I’ve kept one resolution that I made 21 years ago, while pregnant with Eldest Spawn.

I was 16, pregnant, and terrified. I was in college, so I was smart enough to know that this could be very, very bad, for me, the child, and society in general. I was told I would never finish high school OR college, and that the unborn kid was screwed from the start. I might as well just give up now.

I almost did. I spent a few nights with my .357 in my mouth, pretty sure suicide was the only solution.

I didn’t do it. I can, however, still taste the cold, oily, metal on my tongue and it reminds me of the only resolution I ever kept. As resolutions go, it’s pretty vague and it doesn’t exactly reach for the stars:

Screw up my Spawn as little as possible.

It started with the hope that maybe all was not lost. That if I tried hard enough, learned enough, and wanted it enough, we could maybe be ok. I was taking Survey of Calculus at the time, so I began with the known quantities–things I knew I did or did not want: Don’t ever make them feel like the only good option is to kill themselves. Tell them how smart they are. How beautiful, inside and out. Keep them alive and relatively safe. Do what I can to help them not be in the position I was in (trying to parent while still a child) . Tell them they can be whatever they want when they grow up (even a mama duck). Love them.

But…HOW??  I began by talking to other parents (grown-up ones), and reading a lot of parenting books.   That eventually led me to self-help books and counseling, and depression medication, and support groups, where I made some great friends who loved me unconditionally and taught me how to  take care of and heal myself, and my spawn. I tried and retried everything. I made mistakes, and learned from them.

I am not Parent of the Year. I swear too much, I’m cranky in the morning, and until recently, my housekeeping sucked. I hate cooking. I have made a TON of mistakes. But I read something about parenting once that stayed with me…I don’t know who wrote it or where I saw it, but it went something like this: Children are like a clean glass. Every parent harms their children in some way. Some hurts are just greasy fingerprints that can be wiped off. Others leave chips or cracks. Some shatter their glass children irreparably.

My goal is to at least give them the tools to overcome the damage I (and the rest of the world, including themselves) will do to them. So far, so good… I hope.

PS: I found this pic on Facebook today. Perfect timing for this post! It reminds me to ask myself where I am today, and where I want to go. 🙂 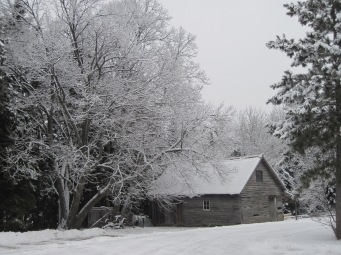 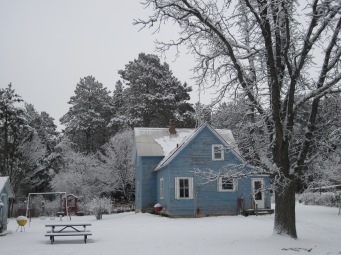 The Little Blue House in the Woods 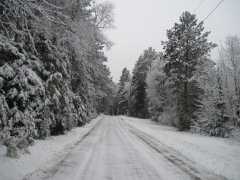 Woodshed now, from the front.

Snow Wave Off the Tin Roof

It’s easier than you might think to  forget that snow is delicate.  We of the northern climes spend months cursing it, shoveling it, salting,  plowing, and bragging/worrying about driving through it.  Last night, though, I lay in the snow for a moment, trying to improve my attitude about winter. It only took a few seconds, and it was better than I remembered. Today, I appreciated the views from my sister and her husband’s home, The Funny Farm, and captured them to share with you. You’re welcome. 🙂

This is a WordPress Gallery, which is a foofy name for a slideshow. Click on any picture to start the show.

The Weekly Photo Challenge was a color: green. Usually the predominant color in Northern MN this time of year is white, but today it was 52 degrees. ABOVE zero. (And yes, that’s in degrees Farenheit, Bill L. from California.) That’s 20 degrees warmer than average. 🙂
Click on any thumbnail to start Gallery View. 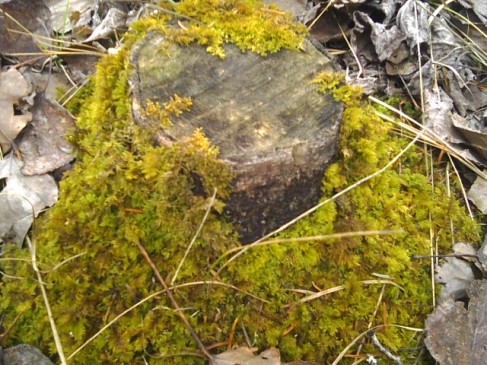 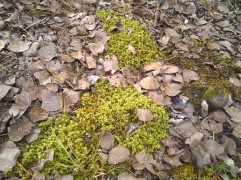 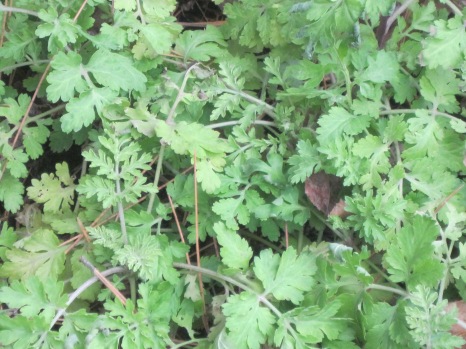 My Grandpa built this garage. North side of the roof is covered in moss. 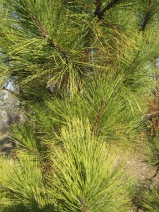 Lamb’s Ear is still holding on…

Last night, my daughter Harley saw Bruce Springsteen and the E-Street Band live for the first time. It broke my heart a little that the Big Man and Danny Federici weren’t going to be there, and for the first time, I didn’t do my usual prep for a concert. I didn’t study setlists, read articles about the other shows on the tour, or cram by listening to every song ever recorded by Bruce and The Band.

We wondered if she’d get to experience  Tenth Avenue Freeze-Out, Badlands, Jungleland, and Born to Run, and how we’d feel about someone else playing Big Man’s solos if those songs were performed. She asked me if I thought I’d cry.

Throughout the show, I kept looking for Big Man and Danny. (See Kubler Ross’ 5 stages of grief…especially denial.) We didn’t see them on the stage, but they were there. I closed my eyes and I heard them. Felt them. Finally, during Tenth Avenue (aka “Roll Call”), it happened.

“Now this is the important part,” he said, and sang, “When the change was made uptown….” As he repeated that line gently, pictures of Clarence floated across the huge screens. Jake Clemons (C’s nephew) made his way out of the horn section as the Boss sang, “AND THE BIG MAN JOINED THE BAND!” I thought he played this solo (and the others throughout the night) perfectly, which is exactly what we needed. I know I appreciated that Jake didn’t improvise–that Miss Harley was able to hear it live, exactly as C would have played it.

Researching this post, I found an interview by Rolling Stone’s Andy Greene with Little Steven Van Zandt in which Steve said it better than I ever could:

“It’s literally classical music for my generation. They play it note for note, which is how it should be played. You wouldn’t improvise on Beethoven’s Fifth, would you?”

Thanks to The Daily Prompt: This Is Your Song for helping me focus 🙂

Boss fan or not, you really ought to read these too:

The Weekly Photo Challenge asked that we write about what “Big” means to us. I chose one of my sister’s dogs, Jai. He lives at  The Funny Farm  and is a rescued Great Pyrenees PUPPY (14 months, 120 lbs).  Jai is short for Ginormous, White, Slobbering Dog. Think puppy brain in a pony-sized body….He digs BIG holes, runs BIG laps, needs BIG toys, and cleaning up after him is a BIG job.

Great Pyrs are bred to protect livestock.  Lois is hoping he will help keep farm creatures IN the fence, and deer, coyotes and wolves OUT of the fence. These dogs are mostly nocturnal , gentle with children, and love to roam their territory. They are working dogs, but Jai takes naps, too. He’s just a baby. 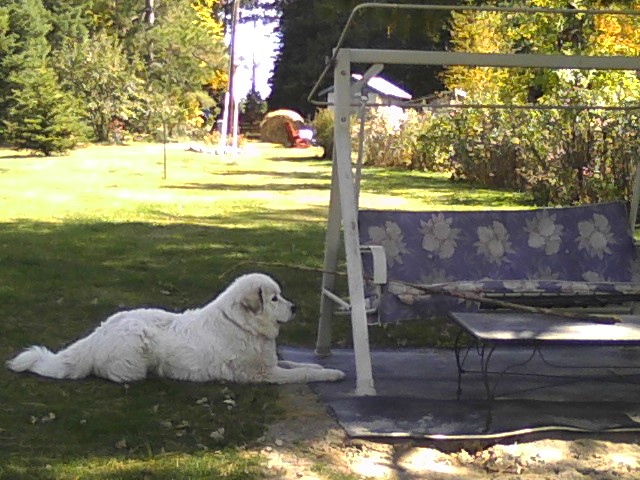 Mr. Stinky Droolface, the Old English/Bull Mastiff Grampa dog of the farm is actually bigger than Jai. Stinky weighs about 180 lbs, but at 10 years old is slowing down considerably. When he was a puppy we called him the Mastiffosaurus Wrecks. At one point my physical therapist recommended I stop visiting my sister until he outgrew the puppy stage. He kept knocking me over by accident.

Of course Walli the Corgi refuses to be left out. She’s 6 months older than Jai, and one-tenth his size. And come to think of it, ten times the attitude. Size is relative. 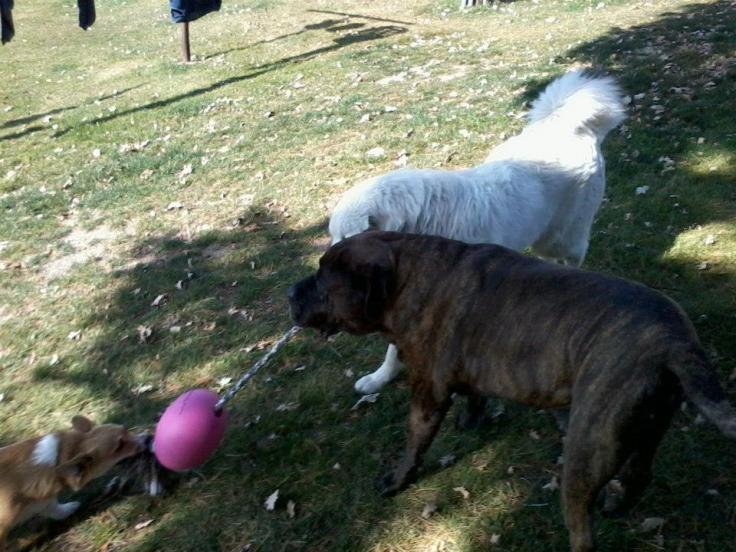 Walli Pajari-Williams goes to work every day with her mom, Lois, at Cook Dollar Barn , while Jai, Stinky, and GusGus take care of the Funny Farm.

What breed do you think Lois needs next? What’s your favorite?

For more details on these breeds, visit the links below.